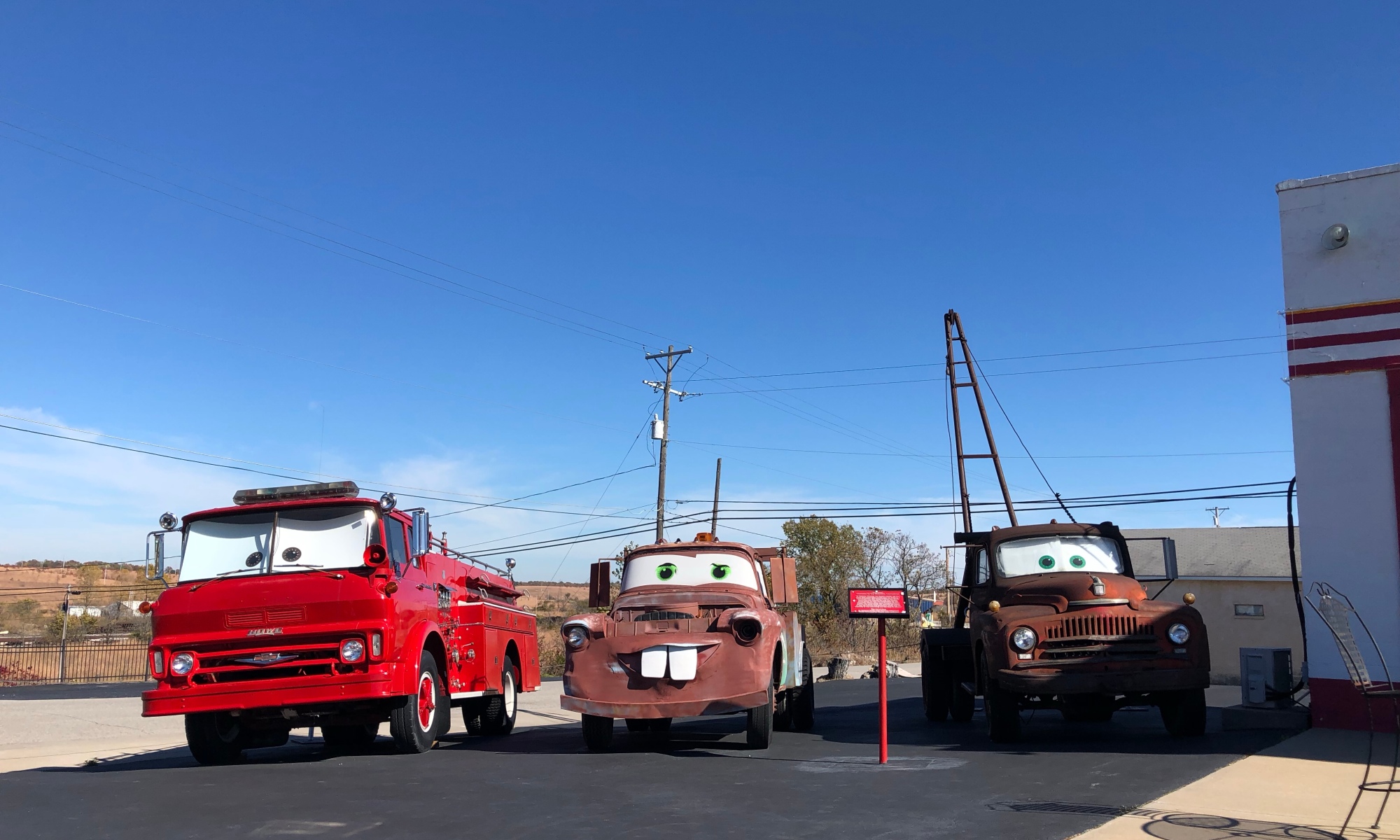 “Did you go over the rainbow bridge?”

“Did you stop at the little store in Riverton?”

Was I supposed to? “I think I missed that.”

Mater, from the Cars movie, is Route 66-shaming me and I’m loving it.

I don’t have the heart to tell him that I put no effort into preparing for the Route 66 portion of my trip. I may have watched a couple of YouTube videos about a year ago. I purchased this ACA bike map on my phone a few days ago. Now, I’m just following it to see what will happen.

What’s happening is that Mater is loading me up with a couple of pounds of promotional literature for Route 66 attractions: themed motels, The Jack Rabbit Trading Post, The Midpoint Cafe. One brochure advertises “FREE 72 oz. steak, if eaten in one hour.” When the history of the rise and fall of the American Empire is written, this artifact will be used to illustrate the tipping point. (2 kg!)

Mater calls his boss to see if they might be able to scare up a newspaper reporter to do a story on, “this guy with solar panels all over his bike.” I was planning on riding another 50 miles today after lunch but the chance of being featured in the Baxter Springs local paper and hanging out with Mater is too good to pass up.

“Mater” is Dean ‘Crazy Legs’ Walker. He has an encyclopedic knowledge of Route 66. Absorbing this knowledge is like drinking from a fire hose. When the Pixar guys were in the planning stages of the Cars movie, they took a road trip along historic US Route 66. Dean is one of the people they met along the way. The backward-driving Tow Mater character in the film is partly based on Dean, who has the ability to turn his legs so his feet face backwards.

I stop at the hardware store on my way out of town to find another splint for my newly broken kickstand. Dave cuts a custom piece of pipe for me and won’t take my money.

Kansas has only 12 miles of Route 66 but they make the most of it.