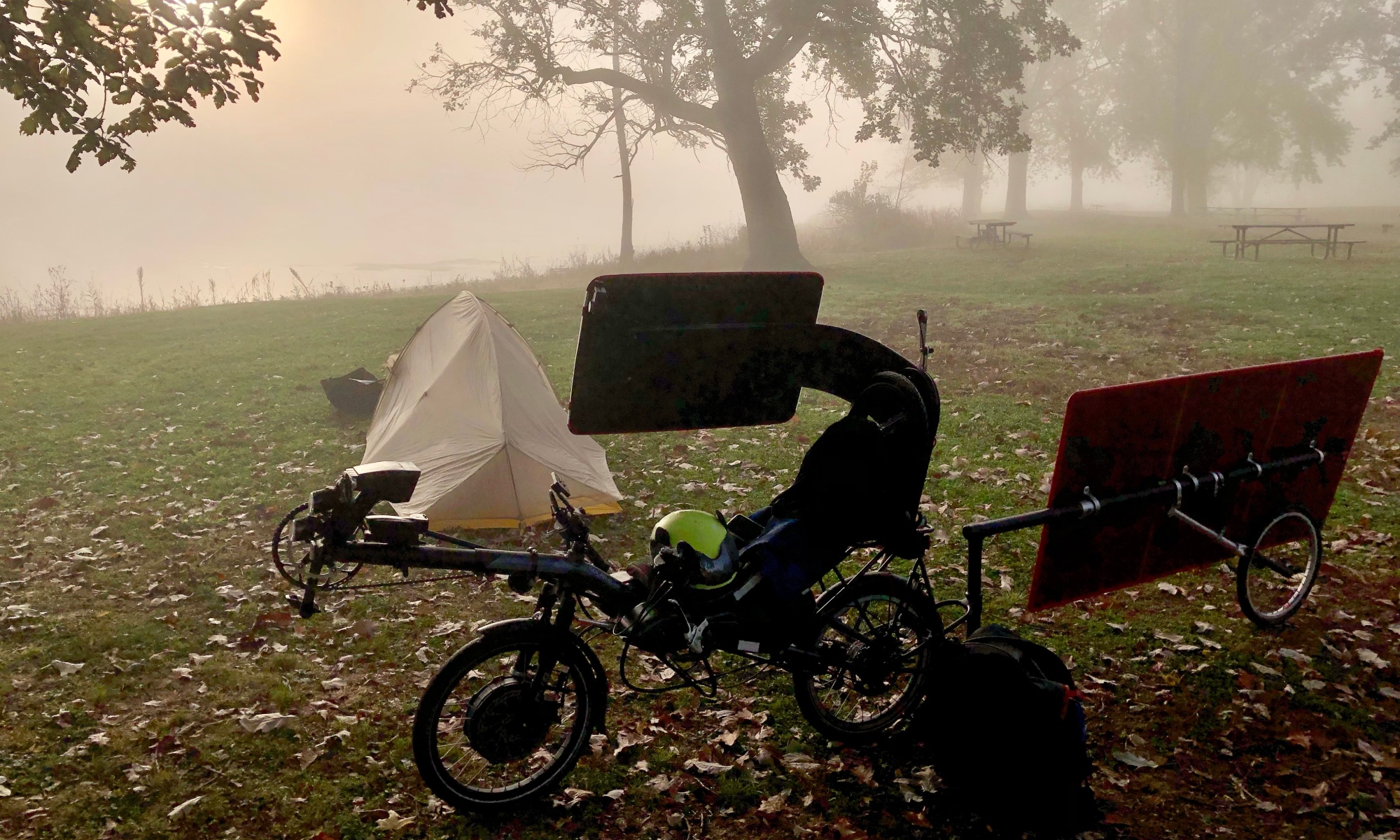 I cross the St. Croix River into Prescott, Wisconsin. The ACA route has me following the east bank of the Mississippi for the next three days and it looks like I won’t be crossing back into Minnesota. I seize the opportunity to collect my selfie with the Welcome to Minnesota sign that I didn’t get when I first entered the state.

I didn’t see anyone on a bicycle in Montana or North Dakota except for a couple of guys who looked like they were not doing it by choice. Like maybe they lost their license to a DUI? As soon as I crossed the border into Minnesota, I started seeing spandex-clad roadies and seriously impressive bike infrastructure. Is this a red state/blue state thing? Something to keep an eye on going forward.

My second day in Wisconsin is an overcast, sunless day. With the crosswind, it feels like I have to work twice as hard to go half as far.

It’s getting colder now and there are fewer opportunities for interactions with people outside. I pop into a cafe for second breakfast and to thaw out. The buttermilk pancakes are disappointing, one has still-runny batter inside. The coffee is stale and weak. When I ask to top up my water bladder I’m told they only sell bottled water.

The mystery source of horse manure on the shoulders of the road reveals itself when I see a horse-drawn buggy going the other way. Based on the way the gentlemen are dressed, I’m thinking Amish? Or maybe Mennonites? Probably Amish.

You came for the solar bike stuff, stay for the scatological references!

Atlas Obscura for the win! “Rock in the House”

On my way to the showers at the next campground, I pass a woman walking an improbably fluffy, white dog. “Are you a doctor?” she asks.

“You remind me of someone.”

“Are you traveling by bicycle?”

“And you’re staying all by yourself in that tent area over there?”

“I hope you don’t get hit by some driver who is texting.”

She really doesn’t have a filter between her brain and her mouth. “Okay. Byeeee.”

On my way back from the shower, I see her again from a distance and make a wide detour to avoid more delightful banter. Not wide enough. “Excuse me, sir!?” she shouts.

“You sure do ask some curious questions. No. I am not 55.” I reply unhelpfully as I walk away.

I rewatch Fargo for the first time since the film was released in 1996. I’m delighted to discover that I had visited so many of the locations mentioned in the film: Bismarck, Fargo, Brainerd, Minneapolis, Stillwater, not to mention back country roads and a small roadside bar or two.

On my last day in Wisconsin, I notice the “America’s Dairyland“ marketing slogan on the license plates, give in to the Pavlovian impulse, and buy some Wisconsin cheese curds at the next gas station. They are delicious.